#3: New car… sooner than I had expected. 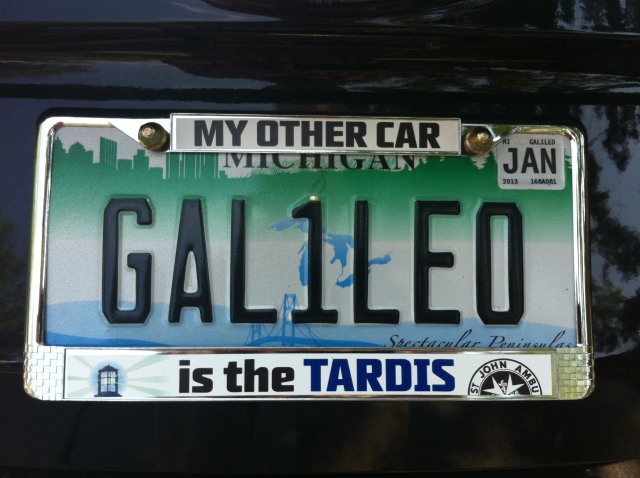 Letting the geek flag fly proudly. If you want a cool TARDIS frame too, click the photo.

Sure, purchasing a new — or at least new to me — vehicle was on my list; I had been driving around a 2000 Honda Civic coupe since 2005.  It was a fine little car, but was starting to show signs of age. I figured it had a good 3 or 4,000 miles left on it, and imagined getting a replacement would have been one of the last things I’d do on this list.

Well, that all changed on November 16, when, as I left my apartment headed for a video-shooting gig in Washington DC, I was met with an empty space in the carport where the vehicle was just seven hours earlier.  I’ve never encountered any real crime here in the humble burg of Royal Oak, so it was all the more unsettling.  Indeed, at first I walked out to the front to make sure I hadn’t parked the car on the street.  But no, the streetside was as empty as the carport was.  Then I recalled how the previous night in preparation for my gig I had taken a couple bags of gear outside to load up the car.  They went in the trunk, but … someone must have been watching (creepy enough), and specualted the gear and the car must have been a good target.

So, after talking to the police and the insurance guy (he informed me that 2000 was the last model year before Honda made anti-theft standard equipment in all of their cars… great), I hustled my way to DC via plane and did the gig.  The videos are here, by the way.

In the plane I had an idea about what to drive upon my return to Detroit. I’d ask if I could borrow my mom’s car for a few weeks while the insurance claim was processed — they won’t start to process the claim for at least three weeks, as most stolen cars are recovered in that timeframe. Luckily, I have a fantastic and very accommodating mother, and I made plans to rent a car from DC and drive down to Myrtle Beach and get her car… thinking I’d return it at Christmastime.

Well, a one-month loan stretched into four, as I finally got around to getting a new car in mid-March. Ford Credit was generous enough to lease me a brand-spankin’ new 2012 Focus. 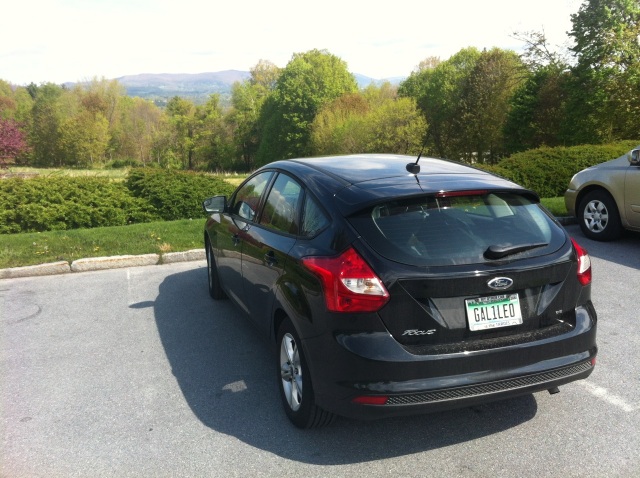 While visiting the Green Mountain State…

I couldn’t be more pleased with the car; it handles well, looks good and is easy on the gas… during one of the trips out to New Hampshire I got almost 40mpg.   If I had been driving right at the speed limit I’m certain I would have.  Amazing how going 65 instead of 70 will impact your mileage. 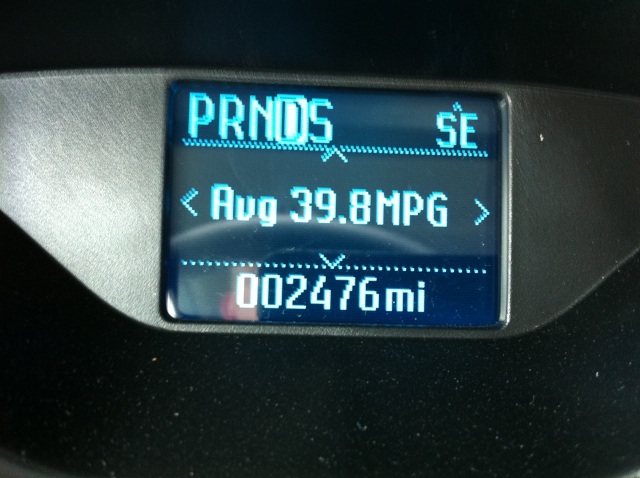 As people have asked… “Why the Galileo plate?”

1) Galileo is my favorite scientist. Astronomer, physicist, philosopher, heretic… there are many ways to admire him.  But I think the reason I like him the best is that by all accounts he possessed a biting, satiric, wicked sense of humor.  He is one of the four people I’d invite to my “dinner for five.”

2) Galileo was the name given to a shuttlecraft on the original Star Trek series, and my car sort of shares the stubby, wedgy look of that vehicle. As it did for thecrew of the Enterprise, it gets me where I’m headed quite reliably. Plus, it fits my geek nature quite well… although if you are reading this you probably realized that already. 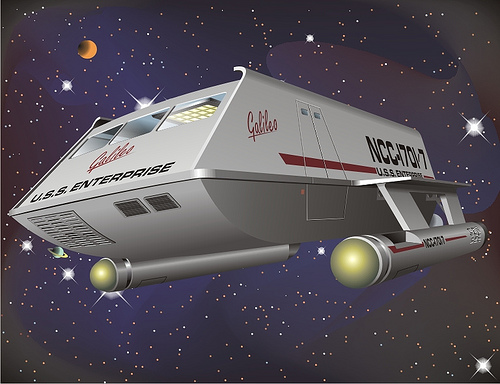 Of course, my shuttle is black, but you get the idea.

Part-time blogger, full-time geek from southeastern Michigan. Disney fan, cyclist, watcher of too many movies for my own good.
View all posts by John →
This entry was posted in Uncategorized and tagged car, doctor who, focus, ford, TARDIS. Bookmark the permalink.

2 Responses to #3: New car… sooner than I had expected.