#28 and the end of a cinematic era 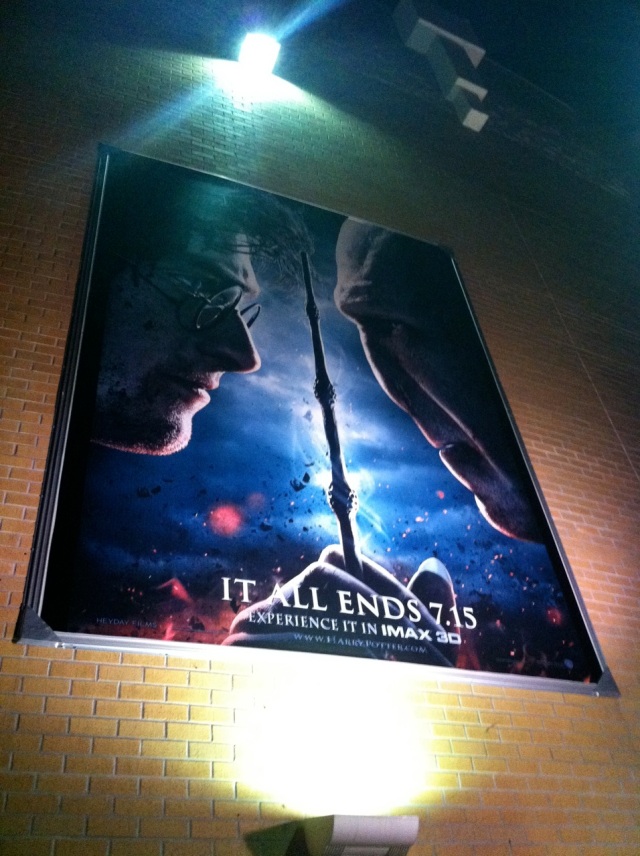 Will there ever be another movie series as broadly popular as the Harry Potter movies?  I would guess not.  For this level of box office you usually need powerful source material, and these movies have been so successful primarily due to the book series that came first.  Without that foundation… I guess 007 would be a worthy competitor, but that series hasn’t had the same guy playing the lead for more than six entires (I know Moore did seven, but A View to A Kill was so bad I’ve erased it from my personal library), nor were all the books in the series written by Mr. Fleming, for that matter.

Item #28 on the list is to attend four midnight premiere screenings, one of which would be Potter #8.  I love going to genre movies on these premiere nights; there’s a special breed of fan who will make time to be the first to see a movie, and it’s always fun to be in their company.  With the Potter movies, multiply the fan craziness many times over.

Those who know me are well aware that I’ve sipped the butterbeer-flavored Kool Aid for a few years now, having attended the final three midnight book premieres and visiting the Wizarding World at Universal *twice* in it’s first year of operation.  So, after a glass of homemade butterbeer (thanks again, Mr. Hansen) and a Harry “Pot-luck” dinner — ripped off from a Wilderness Lodge waitress called Oopsy Daisy — we were off to Celebration Cinemas in Grand Rapids for the fun. 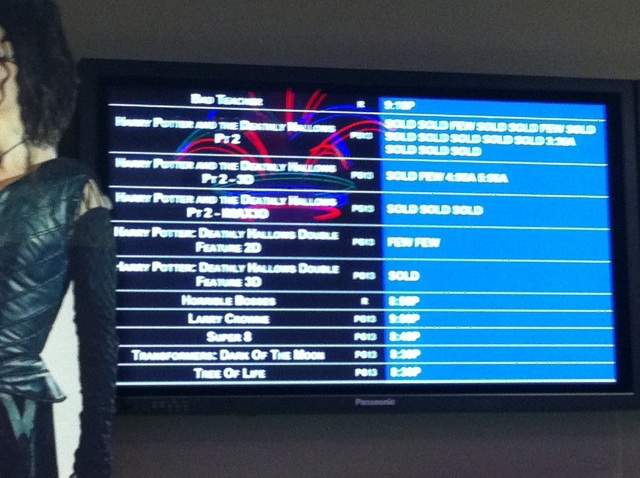 Celebration was showing the movie on all 20 of its screens, and all 20 sold out. Their IMAX screen was screening for 24 hours straight, and there were several 3:30, 4:30 and 5:15 AM shows added.  As Eric and Scott saved my place in line I walked around to chat up some of the other obsessives in line. 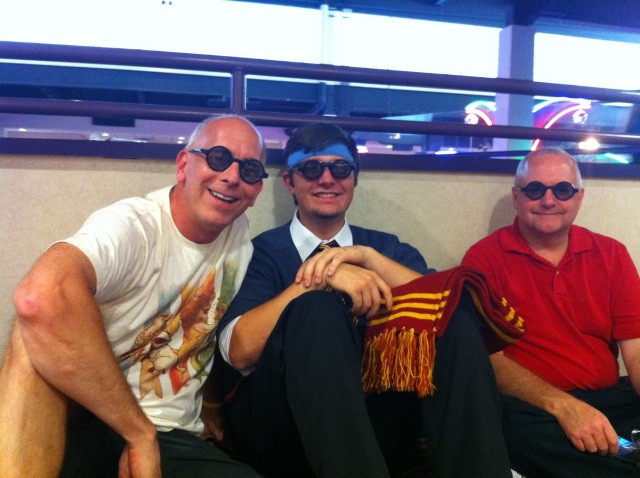 We arrived around 8pm, but there were many who came before us.

These folks were first in line for Theater 1 – the biggest at Celebration – at 6am. 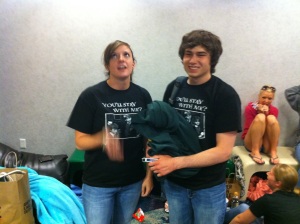 Even more impressive were the kids in line at the IMAX screen — they staked their claim to geek glory at 12:30 pm the previous day!

So… all around me, lines and more lines.  A good mix of adults and kids in costume, or perhaps special T-shirts for the occasion. But just about everyone had big smiles on their faces as they anticipated the final installment… even though probably 99% of them knew exactly what was going to happen as far as plot went. It didn’t matter to them; it didn’t matter to me… I think it was this sort of communal geek-worship opportunity that doesn’t come along in this magnitude very often.

We got into our auditorium about 9:30 or so, which was great. The three of us watched Part One on my iPad in our seats, so I was representing on not just one but TWO geek/fanboy platforms.

The crowd was loud and boisterous during the previews, but as soon as the film started, you could hear a pin drop. After all, we were in church, likely for the last time as this particular group of parishoners.

The film itself?  Great. A fitting send-off to the series. Sure, there were a couple of things I’d have changed tonally, but those are really quibbles in the grand scheme of things.

It probably is too cliche to say it’s about the most fun one can have at the movies, but I guess I just did.

Cross-dressing witches were hardly out of place.

As the auditoriums emptied their throngs of the faithful, geeks young and old gathered in groups to discuss and share, not unlike the atmosphere at the book sales, where a few rushed to read the first chapters just outside the store on a balmy midsummer’s night.

As we left, we saw these guys in line for the 3:30 AM screening. A dawn premiere is always nice...

The next midnight premiere I’ll probably aim for will be the next Star Trek movie due next June. Maybe there will be another film to capture midnight-screening worthiness, but it’s unlikely any will have the magnetic wizard-powered pull that Harry Potter has on so many of its fans.

Well, until the first Hobbit movie arrives in December of 2012.

Part-time blogger, full-time geek from southeastern Michigan. Disney fan, cyclist, watcher of too many movies for my own good.
View all posts by John →
This entry was posted in drinks, movies, vacation. Bookmark the permalink.